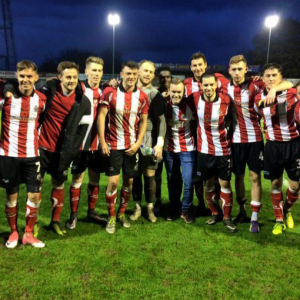 An Altrincham FC football fan from Norway travelled hundreds of miles to watch the team he now supports play. Odd Sindre Tonning was once a Liverpool fan but became a fan of Altrincham Football Club six years ago after ‘being them’ on the computer game Football Manager. Last weekend he headed to Manchester so he could finally get to watch the team he now supports play at their home ground of Moss Lane. Know locally as Alty to their fans they fought out a 1-1 draw against middle-of-the-table Buxton FC. Watching his team Altrincham who are currently top of the Evostik League Premier Division was ‘one of the best days of my life’ he revealed.

Altrincham the place is historically part of Cheshire but due to boundary changes over time it is now considered as being in Greater Manchester. Their ground at Moss Lane is only about 7 miles from Manchester United’s famous Old Trafford stadium and in years gone by both United’s youth and reserve teams have used their J.Davidson Stadium. Current Sunderland attacker Duncan Watmore started his pro-career at the club.

Odd Sindre Tonning attended the match with his father and they gave an interview to Robins Radio at half-time to tell them about their story. Odd had photos taken on the pitch at the end of the match as well as also attending the Meet The Manager and Players evening after the game. Then on the Sunday they stayed to watch the ladies team play too before finally heading back home to Norway. 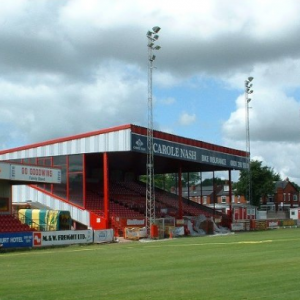 He said: “It was an amazing, unforgettable weekend, one of the best I’ve ever had.

“I first came across Altrincham when I was playing Football Manager six years ago. I went to the bottom of the football pyramid just as Alty were relegated from the National League, so we seemed a good fit for each other.

‘The more I followed the team’s fortunes on Twitter and Radio Robins, the more I fell in love with the club. I vowed the get over for a game one day and had a shirt sent over that I wear all the time where I live, between Bergen and Molde.

‘Finally, I’ve made it, and I’ve been pleasantly surprised by the standard of football.

“We get the ball down and play, and I love that. I can’t believe how warm and friendly everyone has been, and I now feel like part of the Alty family.

“I even got to put a question to Phil at Meet The Manager. I asked if he might bring the team to Norway for a pre-season friendly next summer!

“I hope to come over for another game as soon as I can, but in the meantime I’ll be telling all my friends about my weekend. They know all about the Robins and are always saying: “Hey, you’ve got your Alty shirt on again, Odd – that’s cool.

“I’m doing my best to spread the word.”