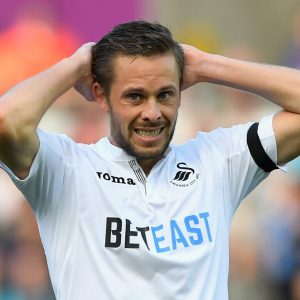 Icelandic midfielder Gylfi Sigurdsson and his newly appointed manager, Bob Bradley, drew at home to Watford, 0-0. Swansea City have been winless since their opening day match, in which they defeated Burnley, 0-1.

This was the second match (and first home match) for Bob Bradley, who was appointed Swansea manager three weeks ago. After losing an exciting match away to Arsenal, 3-2, Bradley earned his first point this weekend. However, it probably could have and should have been more.

Sigurdsson had a good match, but just could not find his finishing touch. He had a decent chance in the first half when he received the ball a few yards outside the box and sent a curler towards goal, but Watford goalkeeper, Heurelho Gomes, was able to catch it. Sigurdsson did not connect as well as he probably wished, as the shot did not have the pace to beat Gomes. 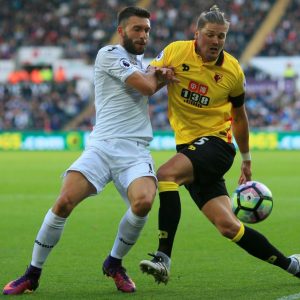 Gonzalez for Swansea against Watford’s Prodl

The Swans played very well in the second half, led by their winger, Modou Barrow, who produced quite a few good chances. The best chance of the match arguably fell to Sigurdsson. Barrow ran with the ball to the corner of the box and then cut it back to set up a one-timer for Sigurdsson at the top of box, where he went for a curled, accurate shot instead of for power. The whole stadium thought it was going in, including Sigurdsson, who briefly started to run towards the corner flag to celebrate, when the ball hit the post and bounced out for a corner.

Sigurdsson also set up a great chance from a free kick. He sent in an out-swinging ball that landed at the feet of Mike van der Hoorn right at the six-yard box. van der Hoorn got a good foot on the ball, but unfortunately hit it right at Gomes, who parried it away with a nice save.

Swansea were definitely the better of the two teams, especially in the second half, but just could not find that last, finishing touch. Things are definitely looking better for the Welsh team since the hiring of Bradley. Led by Barrow and Sigurdsson, they played with good pace and produced a number of good scoring opportunities. It was not enough to grab all three points though, and Swansea is still without a win in their last 8 matches, but if they continue to play like they did yesterday, the goals will start to come and the wins will follow.