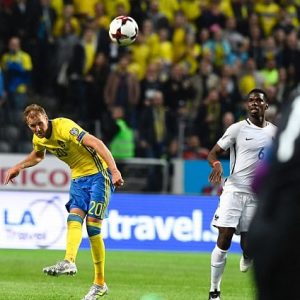 That is correct, in exactly one years time on the 14th June 2018 the Russia World Cup will start with the first game taking place in the Luzhniki Stadium in Moscow. That game will be between the hosts of the tournament Russia and one of the other qualified teams from their group. Could that be Sweden? Could it be Denmark? Could it be Iceland? It might not be any of those but below we take a look at our Nordic nations and how they’re going after the recent round of qualifiers.

France were stunned by Sweden in Stockholm and in particular an outstanding finish from inside his own half from Ola Toivonen. In fact all three goals in the game were memorable. Giroud gave the French the lead with a superb left footed volley from an angle outside the area. The ball came bouncing low towards him, he took one touch by chipping it up to himself and then sweetly cut across the ball and it flew into the top corner.

Jimmy Durmaz thankfully got the Swedes back level in the first half with a half volley from 15 yards out. The game then went back and too and looked to be heading towards the points being shared. Then in stoppage time, Lloris (who’s had a great season in-goal for Spurs) decided to have a wander with the ball outside his own box and take someone on. He was put under a little pressure and instead of whacking the ball into touch, he hit a misplaced pass straight along the ground into the centre circle. Toivonen was first to react and seeing where Lloris still was, took one long curled punt at it to embarrass the french keeper and give Sweden a brilliant win. With maybe just ten seconds to go.

That victory put them joint top with the French on 13 points a piece. With Holland now on 9 points after winning under Dick Advocaat, who’s now in his third spell as their manager. Belarus won too against Bulgaria and are also on 9 points. The Dutch had an easy game against Luxembourg, but having played the way they have recently they’ll just be happy to get going again after the sacking of Danny Blind. Wesley Sneijder got his 131st cap as his team scored five goals, which five different scorers.

If Sweden can win away in Bulgaria next time out and say France beat Holland, then they’ll really be in with a great shout of finishing in the top two, if not outright winners. 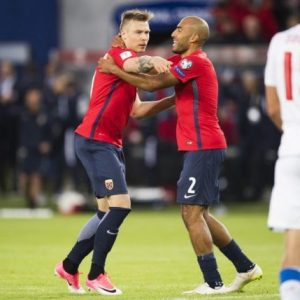 In Norway’s group Northern Ireland secured three more points with a very late winner. Leeds United’s Stuart Dallas scored in the second of three added minutes against Azerbaijan. That keeps them five points behind leaders Germany who smashed seven past San Marino and four ahead of the Czechs who draw with Norway. It was well-earned point but they should still be looking to beats these teams at home.

That is just four points from six games now so qualification is miles away, the plan must be to at least finish above Azerbaijan now. They’re on seven points and face Norway next. Onto this game and with Josh King out injured it was the Czechs who scored first through T Gebre Selassie on 36 minutes from close range. Referee Andre Marriner then quite rightly awarded Norway a penalty ten minutes into the second half and it was smashed home down the centre of the goal by Alexander Søderlund.

In Group I, Iceland’s Gylfi Sigurdsson put in a 90th minute corner which was headed in by H Magnusson to give them the win and points against Croatia. The 1-0 win now takes them level on points with the Croats too at the top of the group. Ukraine surprisingly and shockingly were beaten in a friendly by Malta before the game with Finland, but bounced back to beat to win and all but confirm Finland will not be at the World Cup next year. The Finns only have one point and that was at home to Kosovo. Simply not good enough. The did nearly get another point from this game but with fifteen minutes to go Besedin scored his first international to deny them. 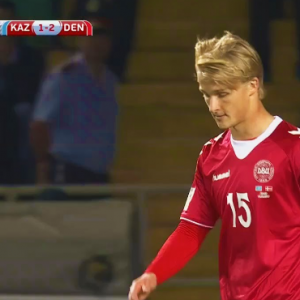 Kasper Dolberg before his goal

Turkey are keeping the pressure on too with a 4-1 away win in Kosovo, so all to play for in September with the top of the table looking like this: Croatia 13, Iceland 13, Turkey 11, Ukraine 11.

Finally Group E and Denmark. After one win and then three straight draws, the Danes got back to winning ways against Kazakhstan with goals from N. Jørgensen (27), Eriksen (51 pen) and Dolberg (81). Which means they’re now level with Montenegro on ten points, but both of them are way behind Poland who lead the way on sixteen. There is a long way to go but I’d say Denmark need at least a point against the Poles in September to stay in contention.

Montenegro themselves scored their 100th goal in International football, Jovetic the man again who has scored nearly a quarter of them. Whilst he also went on to score their first ever hat trick as they beat Armenia 4-1

The Poles remain unbeaten, while Lewandowski’s hat trick too, took him level with Ronaldo on 11 goals in this European qualifying campaign.